The Land of Santan 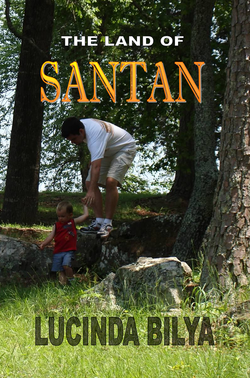 All Rights Reserved
Copyright 2011 by LOC

Click on book cover to find where you can buy this book.

( Part of) Chapter 1 - The Last Meatball

“Mommy, can we be excused?” Philip put his fork on his empty plate.
“Sure, sweetie,”Jen answered.
“It is nice outside. You boys go outside to play until dessert is ready. John, you watch Philip.”
“Ah, mom,” John started to protest because they couldn’t run as fast with Philip tagging along.
“John,” was all Mark needed to say.
“Yes, sir,”John answered his father, and then stabbed the last meatball on the platter and put the whole
thing in his mouth.
“Hey, I wanted that,” Alex protested.
“Ha ha, I got the last meatball,” John said with his mouth full.
Snatching the last piece of garlic bread, which was the end piece, Alex bragged, “And I got the last toast.”
Sam watched the scene unfold as if it were moving in slow motion as Alex grabbed the last piece of garlic toast,
and ran from the dining room. Sam looked at Mark who also was watching their sons re-enact a scene from long ago, back when they were young.
“Santan!” Sam announced as he stood up.
“Santan!” Mark stood with his tea glass in salute.
Sam clinked his glass with Mark’s in answer and then drank it. An eerie silence filled the dining room where all movement ceased after the boys went outside into the back yard letting the screen door slam on their way out. An aroma of garlic and
spaghetti lingered throughout the house while Sam and Mark remembered the years when they were boys themselves…

.....buy the book to finish reading a great adventure of how two brothers turned bad situations in a magical land they called The Land of Santan.