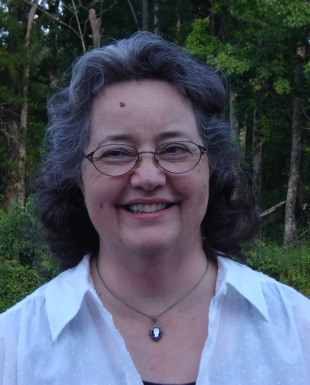 Born in Moab, Utah, I never stayed in one place long enough to grow roots. However, I plan to grow deep roots near the banks of the Arkansas River, which runs through Little Rock, Arkansas.

All four of my grown children live with their children in a small community east of Little Rock. They joke about the need to change the name of the street to reflect the fact that they all chose to live within walking distance of one another, except one. Seven grandsons  and one princess granddaughter, I am busy having the time of my life.

Retirement has been great. To survive on Social Security, I began my own in-home business: Alterations. Sewing is one of my passions in life right up there with writing and family. Family will always take top rating, however. 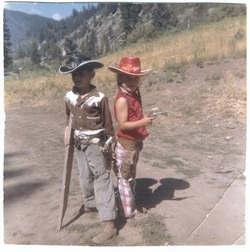 Bobby and me at Lenado, Colorado
I was born in Moab, Utah, which was once barely a speck on the map, not the tourist city it has become today. I don’t remember much about that area because we moved away while I was still in my three-corner pants. After a few more moves, my mother and her new hubby decided to escape from modern-day existence. We loaded up the car with our meager belongings and moved into an old miner’s shack high in the Rocky Mountains.

That shack was an abandoned miner's shack, two rooms – one for sleeping and one for everything else. My step-father soon built another room and a closed porch. The bathroom? No problem, it was out back in a shack of its own, called an Outhouse. Plumbing? Sure thing! There was a bubbling little brook called, Woody Creek, a short distance from our new home. It provided fresh ice cold water year round. My brother and I had an entire mountain to play in for a back yard. It is the one place that will always be “home” to  me. 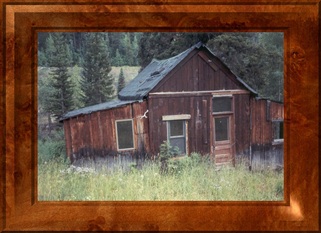 Old shack 40 years later, 2003, with two rooms added
Lenado, Colorado, nestled high up in the Rocky Mountains between Aspen and Glenwood Springs, was once a booming mining town filling the hearts of men with dreams of wealth until the mountains had no more to give.

Lenado echoed with ghostly memories and mountain winds until 1960 when Jack Slogus revived the tiny community by mining the natural wealth of timber. Jack built a sawmill and logging trucks began rumbling up and down the narrow winding road bringing timber for his mill. People moved into the old shacks or built new ones, breathing life back into Lenado while ignoring the legends about a headless woman searching for her murderous husband.
After  having children of my own, I wonder about the stories they told us. The stories  of a ghostly headless woman riding around in a jeep in the mountain roads were probably told to us to keep us closer at home because it was a true wilderness. 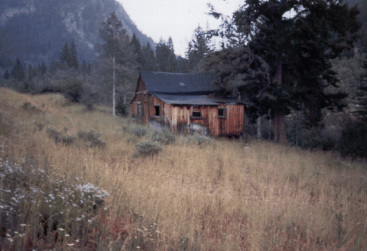 2003 - Only ghosts reside here now
Most everyone living in the small ghost town called it Woody Creek after the name of the creek, which was full of beaver, trout, and unlimited adventures. It was a frontier needing to be explored and although I was young at the time, I grew to love the mountains, nature, and all the adventures regardless of the pain and suffering that reality inflicted.

If I had been born in a different decade, it would not have seemed so strange to live in a miner’s shack roaming the creeks and mountains. However, in 1960 most people had modern conveniences and conncrete beneath their feet, television, indoor plumbing, and central heat. We worked hard each summer hauling wood for the woodshed so we wouldn’t freeze come winter when snow covered the ground for months and drifts often covered the north side of our home.

Grocery shopping and food preservation was a never-ending challenge, but trekking up to the outhouse in the middle of the night would satisfy anyone’s thirst for a fear-factor of a horror movie about zombies and giant grizzlies.
Only a few short years later, my mother divorced again leaving the mountains to move closer to  civilization. That was over fifty years ago and still today, I long to return to my “home.” A part of me resides among the ghosts that haunt that ghost town, now returned to the wilderness with the exception of a few die-hards or summer cottages. The old shack still stands today, but has no floor and the outbuildings have vanished.

In the summer of 2003, I drove 12,000 miles across the continental United States and part of Canada. The entire journey to make peace with a recent painful divorce of my own, my thoughts continually pulled me towards that shack, which I had not seen in 40 years. I was surprised when I drove up to it without any problems as if I had been there recently. The old shack, blackened with time, stills stands beside the huge pine tree that we feared would fall on the house while living there.

Sitting on the granite bolder up on the hill overlooking the shack, I promised myself one day I was going to write about the deep dark secrets that still reside inside that shack. That writing has already begun in the form of several books: The Woody Creek series, and The Runaway.

There are times that I regret not keeping a diary, but certain memories are best left burried. Regardless, I tap into those memories of both good and bad to write poetry, stories, and novels with hopes of sharing with others the adventures of a lifetime.

Why the name, Lucinda? 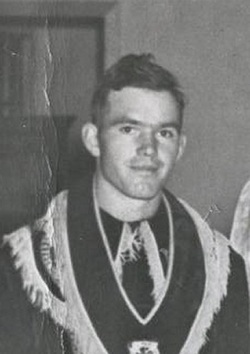 Nelson LaNite
The day I was born, my father, Nelson LaNite, named me Lucinda. When he left to celebrate the birth of his first daughter, my mother changed my name to hers, Helen. Earlier, my grandfather had gone to court and had our family name changed from Bilya to LaNite.  After years of abuse from step-fathers, an overbearing mother, and a rough marriage ended in divorce, I searched for who I was.

Before choosing the name Lucinda Bilya for writing, I used another pen name - Herema Onar. Many people around the world know me affectionately as Hermie. Herema was a transitional name I used as I came out of an abusive marriage until I found complete peace and tranquility in life. I still use this pen name, Herema Onar, for certain novels and poetry. Herema began as a sad and mixed up person, confused about what to do in life after a 23-year marriage dissolved suddenly. Today, I no longer use this name for writing.

For non-fiction musings and thoughts found in one book I am writing, The Runaway, I may use my legal name, Helen Chadwick. Never have I chosen these names to hide or obscure who I am. Rather, it is best to use different names for different genres of writing. Encore readers will look for similar writings, not a book more appropriately for an older audience. With technology today, it is not difficult to find ALL of my writings regardless of the name I chose to use while writing them.

Thank you for taking the time in reading a little about me. One day, more books will  be completed and published for your reading enjoyment. Currently, I have over thirty working titles in varying stages of completion.